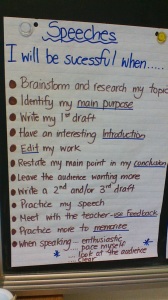 My feedback centered on speaking style, physical presence, and then content. After the student finished their speech, the class would grade it on a scale of 6-10 in terms of how much the speech interested them. I tried to provide warm feedback. Next time, do less reading and try to make more eye contact with the audience.  Don’t play with your hair or tap your foot as you are speaking. Then, I had the students write for 30 minutes assessing their performance. These reflections provided me with a great deal of insight into who had taken the project seriously and who did not. There are four student examples in italics below followed with my interpretation of their comments.

For this kind of work, I know I have gotten better in at least three ways. One way I’ve gotten better is because I now know how to grab the attention of the audience with my introduction. The second way is that I connected with my topic in an emotional way that helps make my speech more interesting. Lastly, I found out how to put the right amount of facts and information so it was at least a three-minute speech.

This student wrote a 230 word reflection that indicated how good she felt about her speech, which opened with a personal story about the demise of her family’s business and then segued into The National Boycott of Jewish businesses. This student made the audience care about when happened to her family and, in turn, the audience thought about all of the hard work and effort that German Jews had put into their family businesses, which were ruined after the boycott. It was a great example of how to connect with an audience.

In my opinion, I did a very good job on my work. I specifically like that I had a good opening and closing. One thing I did not like was that there were not many facts. I could have put more information on some of the children in the Kindertransport. I enjoyed that many people liked my speech. 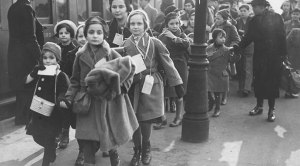 Throughout the year, I have written multiple speeches. Each time I write one and say it in front of a group of people, I see a change in myself. Especially at the beginning of the year, the first speech I had written was lengthy and it had too much detail. The changes that I see from the speech are the ability to connect to the audience, create a purpose, and the ability to speak in front of people in general.

This student wrote a 558 word reflection that detailed how she had learned to craft her speaking style after participating in our school’s Academic Decathlon program. Our school’s Aca Deca coach is a wonderful English teacher who brings medals back to the school, year after year. She is gifted at teaching public speaking, so it didn’t surprise me that this student had a well-developed opening. The student spent the first 90 seconds of her speech putting the audience into the events of Kristallnacht. Through eyewitness accounts, she made the audience visualize Jewish children crawling out of the wreckage of a burning hospital over broken glass while the doctors and nurses trying to save them were beaten to death by vicious, anti-Semitic crowds. Then she layered in the facts that led up the event and concluded by giving the audience clear directions in how they should respond whenever they witness acts of religious or racial intolerance. The audience was putty in her hands. I only wish her parents and the school superintendent were in my class to witness the speech. It was fantastic.

My work was a lot different than others because my speech was very unorganized. In my speech I had a lot of names that I couldn’t say and even if I did say then, I would say them wrong or not even say them at all, leaving a dead spot in my speech. Most of the class was reading every word off their paper or their phone and I was one of them. The students who had their speech memorized really stood out. I was very confident and loud reading my speech at home, but got very shaky and nervous in front of the class. My legs were shaking and I couldn’t speak correctly and I would want to correct that.

This student learned more from watching the other speakers than I could have ever taught him. I didn’t need to give him any feedback.

One thought on “Speech Feedback”